Kevin Kempf of PG NOLA won the King of the Wrap World title in 2015 and the King of North America Central in 2016, but he recently had a much different reason to be proud of his graphic installation skills. Before the thrilling comeback in this year’s big game, Kempf made a young fan’s day. Noah, a 12 year old boy waiting on a new prosthetic limb for his lower right leg came into PG NOLA just before Christmas with his mother and an uncommon request, a graphic of his favorite player, Rob Gronkowski, for his new limb. Kempf decided that the best way to fulfill Noah’s wish was with Avery Dennison printable film.

“Noah was a little shy at first, but it was awesome to see him get excited about my designs,” said Kempf. “We wanted to make him feel at home with us, and when we did the wrap, he was all smiles from ear to ear.”

Kempf used Avery Dennison MPI 1005 digital supercast film (now MPI 1105) to customize the new leg, making him the talk of his school. Noah even showed off his new limb at a track meet. 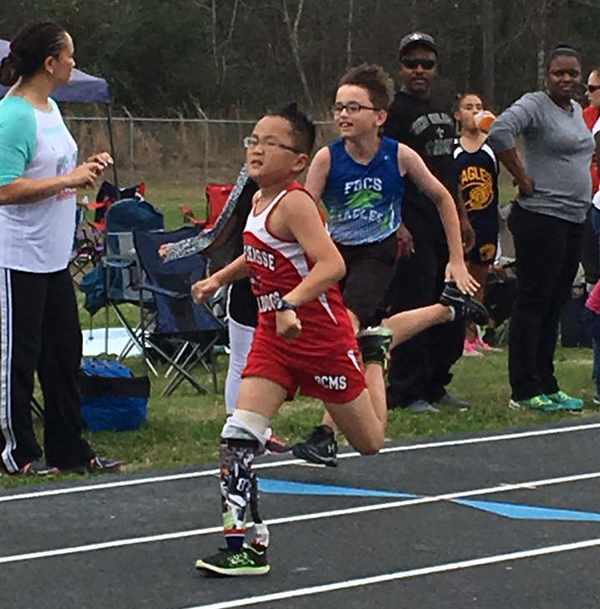 “It was great to see the reception the boy got at school and the response we had on Facebook to his story,” said Kempf. “Media in Providence, Rhode Island even used stills of his leg during coverage of his favorite team’s championship.”

In Dallas, Duston Noble of Wrap Experts was asked to create a tattoo-inspired wrap for a motorcyclist who had lost his arm in an accident. He too chose Avery Dennison printed film for the application, using MPI 1105.

“MPI 1105 is a good all-around material,” said Noble. “It’s made to be durable in harsh environments, and I can’t think of a different material we would have chosen for this project that will see a lot of wear and tear.” Making customers happy is a great feeling for every wrap shop, and making a difference in someone’s life was an opportunity that neither Kempf or Noble could pass up.

Have a project using Avery Dennison film that we should share? Show us at  http://avydn.co/GraphicsSubmission.