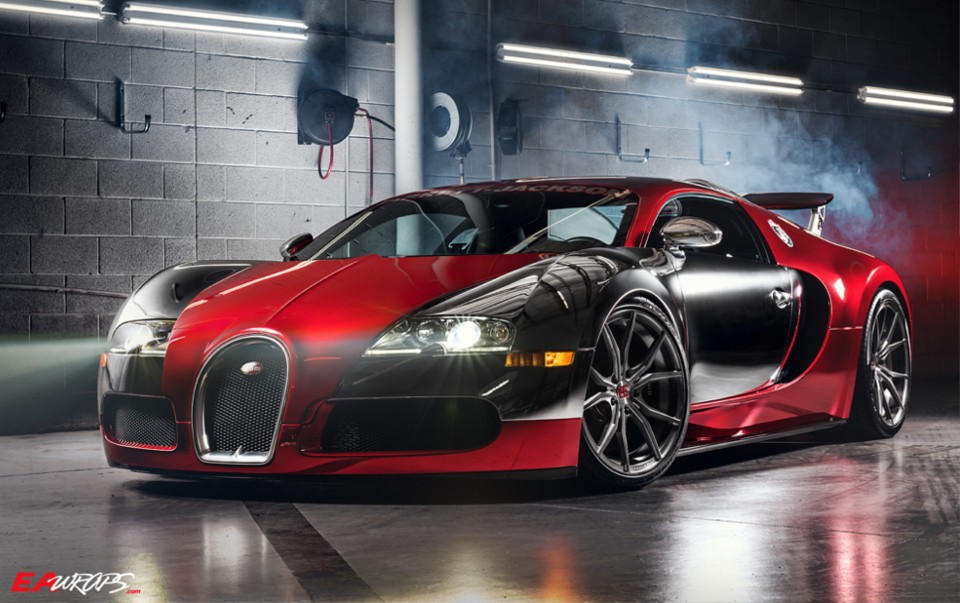 Echelon Autosports, based in Scottsdale, Arizona, lived up to their tagline, “Taking Your Vehicle to the Next Level,” with an Avery Dennison Conform Chrome Red and Silver wrap on Craig Jackson’s Bugatti Veyron. Jackson is Chairman and Chief Executive Officer (CEO) of Barrett-Jackson, The World’s Greatest Collector Car Auctions®.

In January, Barrett-Jackson launched a year-long charity initiative “Driven Hearts,” led by Carolyn Jackson, vice president of brand strategy, for the collector car auction and automotive lifestyle event company. The campaign is focused on raising funds and awareness for the American Heart Association.

“We lost a number of beloved members of the collector car community to heart issues,” said CEO Craig Jackson. “Charitable giving has been a pillar of Barrett-Jackson going back to 1966 and we are dedicated to continuing that tradition. The newly wrapped Veyron will help support our Driven Hearts initiative to help raise money and bring awareness as we work together to promote heart health.”

At the company’s 47th Annual Scottsdale Auction in January, the chrome wrapped Bugatti Veyron was prominently displayed. It was perched atop a sign promoting the helpful acronym “FAST” (face drooping, arm weakness, speech difficulty, time to call 911) to make attendees aware of the warning signs of stroke. It also proved to be a popular backdrop for photos.

Carolyn and Craig Jackson’s 1988 Chevrolet Corvette 35th Anniversary Edition was auctioned and raised $350,000 to benefit the American Heart Association. It was donated back to be resold at a future Barrett-Jackson auction. Residents of Arizona can also purchase new Barrett-Jackson #DrivenHearts license plates.

EA Wraps works with clients to create works of art through vehicle customization and design while providing the best quality of service available. You can follow the #DrivenHearts campaign on Instagram and at DrivenHearts.org.