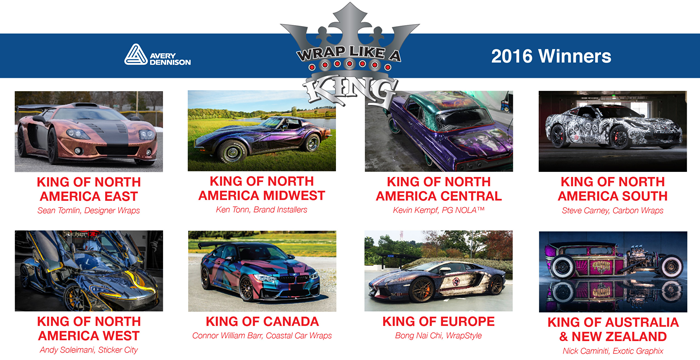 “Once again, installers from around the world used Avery Dennison vinyl in ways we never expected,” said Jeff Losch, North America marketing director at Avery Dennison Graphics Solutions. “The Wrap Like a King Challenge continues to be a quality showcase of talent and creativity to what installers can do with car wrap vinyl.”

Each Regional Wrap King won an initial prize package valued at almost $3,200. The prize pack includes a three-night stay in Las Vegas to attend the SEMA show, $500 cash, an Avery Dennison Wrap Class of their choice, a Regional Wrap King trophy, Wrap Like a King swag and a personalized 67” Race Ramp product.

On November 2, at the 2016 SEMA Show in Las Vegas, the 2016 King of the Wrap World grand prize winner will be announced. Richard Rawlings, owner of Gas Monkey Garage and star of his own television show, Fast N' Loud, will announce the winner at the Avery Dennison booth #12551.

“I’ve been a judge for the Wrap Like a King Challenge since it was created in 2013. The entries this year were creative and some of the best technical work I’ve ever seen,” said Justin Pate, professional wrap installer. “The entire Challenge really represents the growth of the wrap community over the past four years. Every year the installers develop and show off stronger skills and push the envelope of what you can do with Avery Dennison Supreme Wrapping Film and cast vinyl films.”

The eight professional judges evaluated the 224 total submissions based on the following criteria: visual transformation (difference between the before and after pictures submitted), quality and skill level of installation, overall public look and appeal and uniqueness of the design.

"I couldn't be more excited about being named a 2016 regional winner. With more countries, participation and the entries in this year’s Challenge, I can tell that installers are really stepping up their game with incredible creativity and higher levels of skill, which is awesome to see!” said Kevin Kempf, owner of PG NOLA™ and last year’s King of the Wrap World. “I'm looking forward to seeing who the judges crown as the king this year. Fingers crossed that I’ll be the first person to take back-to-back titles!”