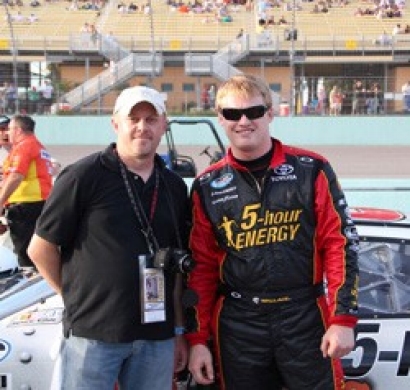 Daniel Wayne Logue's winning design, Salute the Soldiers, hit the track at the last Nationwide Series race in Homestead, Florida on November 20th. Logue, the winner of the Avery Graphics Design 66 Challenge, and his brother attended the last NASCAR race, met Rusty Wallace and Steve Wallace and got a VIP tour of the Homestead facility.

Salute the Soldiers, designed by Daniel Wayne Logue of Lincoln, Nebraska, is an homage to our soldiers depicting the popular markings used on U.S. military aircraft in the World War II era. It was chosen as the first place winning design of the Avery Graphics Design 66 Challenge by NASCAR Nationwide Series driver Steve Wallace, the Rusty Wallace Racing team and sponsor 5-Hour Energy. More than 120 entries were submitted to the contest from all over the United States and Canada.

“It was so exciting to see No. 66 wrapped with my design in person and on the track at a NASCAR Nationwide Series race,” said Logue, first place winner. “And, it was amazing to meet Steve and Rusty Wallace and know that my design was seen by millions of people.” Logue has worked in the sign industry for seventeen years and spends much of his time designing vehicle graphics in his current position at Express Signs in Lincoln, Nebraska.

“I was proud to race my No. 66 5-Hour Energy Toyota Camry with the Salute the Soldiers design on it,” said Steve Wallace. “The designs we received from the Avery Graphics Design 66 Challenge were awesome.” Wallace finished 15th at Homestead and finished the season in 10th place in the NASCAR Nationwide Series.

“The images and design of Salute the Soldiers really stood out on the track,” said Todd Hain, Marketing Communications Manager at Avery Dennison Graphics & Reflective Products Division (GRPD). “The Avery Graphics Design 66 Challenge received an excellent response and we want to thank everyone who participated.”

Avery Dennison Graphics & Reflective Products Division joined forces with the Rusty Wallace Racing team at the beginning of 2010. Avery Graphics products were used on both Wallace’s No. 66 and Gaughan’s No. 62 during the 2010 season.

The winning designs and all the entries in the contest are available atwww.supercastmyride.com.

For more information on Avery Graphics products, to order a sample roll of MPI 1005 Supercast film, or to obtain pricing or roll sizes, printers can visitwww.averygraphics.com to locate a distributor (on the Partner Page) or contact Avery Dennison at 800-282-8379 for additional product information.