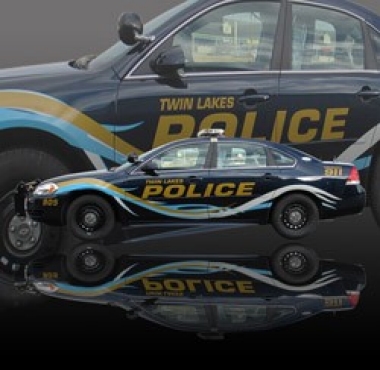 “We needed to update our squad cars’ graphics and a Village Trustee suggested the idea of a contest in partnership with the local high school,” said Twin Lakes Police Chief Dale Racer. He approached Wilmot Union High School Principle Chris Trottier and Juliann Kunstler, the teacher of the Advanced Computer Graphics class, about the contest idea and received their enthusiastic approval. Chief Racer presented the contest, rules and deadline to the class in September and gave them two and a half months to create the designs.

“We received more than twenty designs and narrowed the field down to six finalists,” said Racer. “It was hard to choose a winner from the entries we received. The students’ designs were very impressive.”

“We produced Sonja’s design on Avery HV 1200 White film and it turned out really well,” said Kris Harris at Road Rage Designs. “Now that these films feature Avery Easy Apply RS technology, the installation was much quicker and easier.”

For more information on Avery Graphics products, obtain pricing or roll sizes, printers can visit www.na.averygraphics.com to locate a distributor (on the Partner Page) or contact Avery Dennison at 800-282-8379 for additional product information.