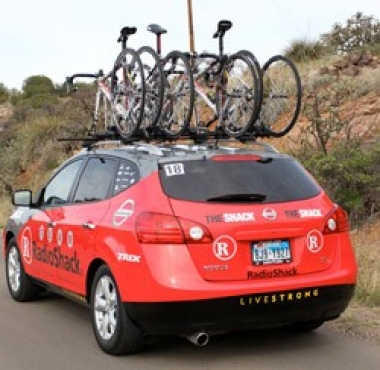 Team RadioShack, founded by Lance Armstrong in 2009, needed to brand its U.S. fleet with the team's graphics for its 2011 North American stage races. The Nissan fleet provides support to the 29-member team at races around the country, kicked off by the Tour of California in May. The team's management contacted APE Wraps in San Diego for the second year in a row.


APE Wraps was contracted to create the graphics, print and install the wraps for Team Radio Shack’s five support vehicles, bus and trailer. The fleet provides support to the cycling team’s riders at races around the country.

The vehicles needed to be ready for the first race in North America. The 2011 Amgen Tour of California, an 800 mile, eight day Tour de France-style cycling road race, covered much of California from May 15 - 22.

“We were thrilled to work with a brand like Team RadioShack again and inspired to work on the vehicles that would support the team’s professional cyclists, including stars like Levi Leipheimer, Chris Horner and Ben King,” said Troy Downey, president of APE Wraps. “We adapted the team’s branding and graphics, from the designs used for the European tour, to fit their U.S. fleet.”

“We chose Avery Dennison’s MPI 1005 Supercast Easy Apply RS and DOL 1360 overlaminate for this job because of their high quality and excellent printability,” added Downey. “Pairing these two Avery products together provides maximum conformability in addition to an increased speed of installation.”

The Team RadioShack fleet was ready for the 2011 Amgen Tour of California kick-off. The world’s top professional cycling teams covered a tough course throughout the state of California during the largest cycling event in the United States.

Team RadioShack riders didn’t disappoint their U.S. fans. Levi Leipheimer and Chris Horner finished Stage 7 in first and second place respectively. Horner went on to win the 2011 Amgen Tour of California with Leipheimer finishing in second, only 38 seconds behind.

APE Wraps, the original custom vehicle wrap company, was founded by Troy Downey. The company leads the industry in creating custom wraps for cars, trucks, SUV’s and off-road vehicles. APE Wraps vehicle wrap and graphics services are used by customers and marketing agencies throughout the world. National and international shipping is available. For more information, click HERE to view the APE Wraps profile.

For more information on Avery Graphics products, printers can visitwww.averygraphics.com to locate a distributor (on the Partner Page) or contact Avery Dennison at 800-282-8379.