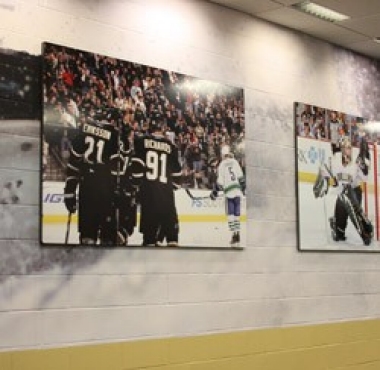 The Dallas Stars management team partnered with its graphics and printing partner, Inkjet International, to inspire the team with new graphics throughout its practice facility in Dr. Pepper Arena. The Stars narrowly missed the playoffs last year so team management decided to find innovative and new ways to improve player performance, training and teamwork starting in the off-season and carrying through to the2011 playoffs.


In order to kick start the Stars 2010 – 2011 season, the new motivational, team-oriented graphics were installed in the practice rink and players lounge, dressing room and gym. One creative aspect of the campaign, which Inkjet International brought to the Stars, was using images of kids playing pond hockey that is visible in the rink.

“Many of our players spent their childhoods playing pick-up hockey games on ponds around the world,” said Mark Janko, manager, hockey administration for the Dallas Stars. “We wanted the players to draw motivation from the images and recapture the joy of playing the game for fun, but also playing their hearts out to win – like they did when they were kids. With Inkjet International’s help, we achieved our goal.”

A large image of kids playing hockey now adheres to the rink wall in the Stars’ Frisco practice facility. New images of the team’s players also adorn the walls of the player’s lounge with a digitally printed backdrop of ice spray from a hockey skate. One photo shows goalie, Kari Lehtonen, catching a puck in the goal from the 2009 – 2010 season. A new graphic highlighting the team’s 1999 Stanley Cup win and conference and division championships, as well as team captains and player’s names and numbers covers an entire wall of the lounge.

“We tested several brands and the Avery Graphics product proved to be the best solution,” said Alok Sarna, vice president at Inkjet International. More than 1,500 square feet of Avery MPI 1005 Supercast Easy Apply with DOL 1360 gloss overlaminate was printed and installed in the player’s lounge.  Avery MPI 1005 Supercast films are popular with graphics providers for their color saturation, image clarity and ease of installation.

“It conformed to the walls beautifully and provided a stunning result,” added Sarna. “The Avery Graphics product was easy to work with during the install, and the technical expertise provided by the Avery Dennison team was extremely helpful.”

The Stars created a new slogan for this year’s season – Every Day for Each Other – that was placed in the team’s locker room. “We really wanted to encourage teamwork among the players,” added Janko. “That’s the foundation for winning games.” The slogan is displayed prominently in the gym and can be seen from everywhere in the room. A photo of each player in a key play from last year’s season hangs above his helmet and uniform in the dressing room.

The motivational campaign is having the desired effect this season.

For more information on Avery Graphics products, printers can visitwww.averygraphics.com to locate a distributor (on the Partner Page) or contact Avery Dennison at 800-282-8379.