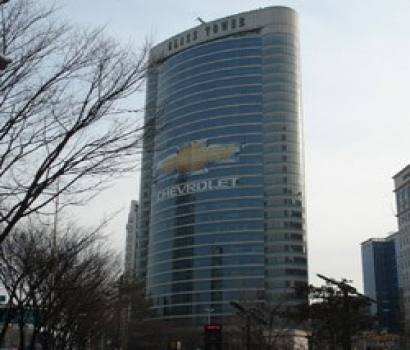 The Korean unit of General Motors announced it would remove “Daewoo” from its company name and replace the GM Daewoo brand with the Chevrolet brand late last year. The announcement was showcased with a large building wrap of the Chevrolet icon installed on the Glass Tower, a 32 story building in the busy Daechi-dong area of Seoul. The graphics were printed on Avery MPI 3709, a 60/40 perforated window film that provides visibility from the front and is invisible from the back, that is available in Asia.


When GM Daewoo decided to change its name to GM Korea and begin selling most of its cars under the Chevrolet brand, it wanted to promote its big announcement in a big way. To reach its target audience, a wrap of a prominent building with a huge graphic, 25 meters (82 feet) tall and 50 meters (164 feet) wide, depicting the Chevrolet logo was installed on the Glass Tower.

The high-profile promotion on the Glass Tower – a highly visible building – in busy Daechi-dong, the heart of Seoul's business district, was installed for a month. The challenge was to deliver high impact graphics that were easily removable and would not disrupt the vision from the interior of the building.

For more information on Avery Graphics products, pricing or roll sizes, printers can visit www.averygraphics.com to locate a distributor (on the Partner Page) or contact Avery Dennison at 800-282-8379 for additional product information.