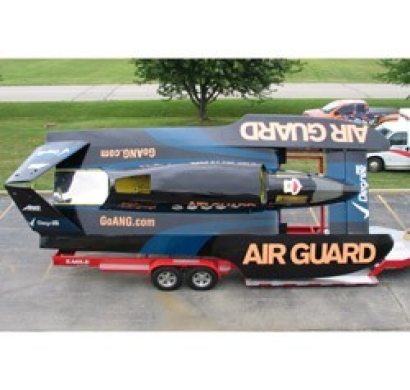 Ted Porter bought two of the former Miss Budweiser hulls in 2009 for the Precision Performance Engineering, LLC team. Miss Budweiser is a hydroplane originally built in 1963 and sponsored primarily by Budweiser beer. In September, Ted turned to Road Rage Designs in Spring Grove, Illinois to wrap the boats for the H1 Unlimited race in San Diego. These are the first-ever wraps of a hydroplane in the U.S. and Road Rage relied on Avery Graphics vinyl and overlaminate for the job.


Road Rage printed and wrapped the Miss Budweiser, which has gone through rebuilds and fine-tuning since 1963 and is now known as U-7, with Air National Guard graphics for the AIR GUARD Championship race presented by Degree for Men September 17 – 19 in San Diego, California. The U-7 came in third place at the race!

Road Rage often uses Avery MPI 1005 Supercast Easy Apply RS and DOL 1060 Gloss overlaminate for vehicle and fleet wraps but this was the first time the material was put to the test on a hydroplane that traveled at speeds of 200 mph. “The vinyl held up well,” said Kris Harris, vice-president of Road Rage. “We were really excited to be involved in such a unique and demanding wrap. The Avery Graphics vinyl went on easily and withstood the test of the race.”

The Avery MPI 1005 Supercast Series features enhanced conformability and stays down over complex curves and rivets with no tenting or lifting – a new option that is ideal for applications like the hydroplanes.

Avery Dennison films featuring Easy Apply and Easy Apply RS technology allow installers to achieve high quality results and typically complete the job in less time than with most other films. When combined with Supercast films, it’s a strong combination that can be applied to objects that have curves. The films areremovable and won’t affect the surface they are installed upon.

The Precision Performance Engineering, LLC team show boat was also wrapped with Air National Guard graphics and on display at the race. The team has won one National Championship, one World Championship, several heat races and weekend race wins.  The U-7 is one of the winningest hulls in the Miss Budweiser career. The boats were wrapped in less than two weeks and more than 2,000 square feet of vinyl were used for the installation.

Unlimited Hydroplanes are capable of 200+ mph on straight-a-ways with qualifying average lap speeds ranging from 130-165 mph. The boats are 28-30 feet in length and weigh a minimum of 6,750 pounds. Historically the boats have been painted with vinyl decals applied on top, many times the decals have come off because of the speed at which the boats are running.

Road Rage Designs was established in 1992, after Mike Grillo, founder and president, grew tired of working for other graphics companies that didn't offer the customer service and quality of graphics that he knew he could provide. Road Rage helps clients stand out from the crowd. The shop employs eight people and specializes in vehicle wraps, fleet lettering and graphics, wide format digital graphics, and graphic design services.  For more information on Road Rage Designs, visit their website at www.roadragedesigns.com.