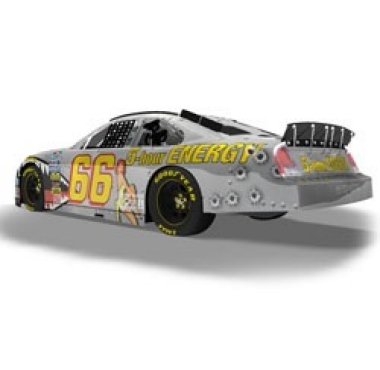 Three designs have crossed the finish line and are in the winner's circle of the Avery Graphics Design 66 Challenge. Salute the Soldiers by Daniel Wayne Logue was selected as the winning design, chosen by NASCAR Nationwide Series driver Steve Wallace, the Rusty Wallace Racing team and sponsor 5-Hour Energy. More than 120 entries from the United States and Canada were submitted to the contest.


Salute the Soldiers will be printed on Avery MPI 1005 Supercast film and installed on the No. 66 5-Hour Energy Toyota Camry for the Nationwide Series season finale in Homestead, Florida on November 20, 2010. The design is an homage to our soldiers depicting the popular markings used on US military aircraft in the World War II era.  Logue and his guest will be on hand in the pit to see Salute the Soldiers in action on the track and meet the Rusty Wallace Racing drivers – Steve Wallace and Brendan Gaughan.

“I am so thrilled that the Rusty Wallace Racing team and 5-Hour Energy chose my design as the winner,” said Logue. “It will be incredible to see my design on the track at a NASCAR Nationwide Series race that will be viewed by millions of people. Thank you Avery Dennison for this opportunity and sponsoring the contest.” Logue has worked in the sign industry for seventeen years and spends much of his time designing vehicle graphics in his current position at Express Signs in Lincoln, Nebraska. Logue's 5 Hour Power design was also selected as the third place winner.

“I am excited to race my No. 66 5-Hour Energy Toyota Camry with the Salute the Soldiers design on it at Homestead,” said Steve Wallace. “The top ten designs we received were excellent and we had a tough time choosing our favorites.”

“The images and design of Salute the Soldiers will really stand out when they’re printed on Avery MPI 1005 Supercast film, and we’re excited to see the design come to life on No. 66,” said Todd Hain, Marketing Communications Manager at Avery Dennison Graphics & Reflective Products Division (GRPD). “Thank you to all the designers who submitted entries in the contest. The designs and contest participation far exceeded our expectations.” The sign and graphics industry will see a preview of the winning design on the No. 66 show car at SGIA Expo in the Avery Dennison Booth (#3069).

Landshark designed by Shawn Magee was chosen for the second prize which includes a Rusty Wallace Racing autographed helmet signed by Rusty Wallace, Steve Wallace and Brendan Gaughan, a $500 Visa gift card and 36 bottles of 5-Hour Energy. “The opportunity to bring my creativity to NASCAR and submit designs for Steve Wallace’s No. 66 5-Hour Energy Toyota Camry was awesome,” said Magee. “It was a lot of fun and I’m truly honored to receive the second place award. It’s not every day that your design is chosen as runner-up in a national contest.”

Shawn Magee is a freelance designer working in Mebane, North Carolina. Over the last ten years, he has created identity systems, print and web designs for various clients across many industries. Shawn takes pride in developing creative, unique designs for his corporate clients. You can see his work atwww.shawnmageedesign.com.

“5-Hour Energy is a proud sponsor of Rusty Wallace Racing and we were excited to participate in the Avery Graphics Design 66 Challenge,” said Carl Sperber, Creative Director for 5-Hour Energy. “Congratulations to Daniel Wayne Logue and Shawn Magee for making it to the winner’s circle. We had to make some hard choices but their designs stood out and were outstanding.”

Logue, also the third place winner, will receive a Rusty Wallace Racing autographed die cast car, $250 Visa Gift card and 12 bottles of 5-Hour Energy for his design, 5 Hour Power. The top ten cars were determined the most popular by visitors voting on the website. Designers could submit more than entry to the contest.

Avery Dennison Graphics & Reflective Products Division joined forces with the Rusty Wallace Racing team at the beginning of 2010. Avery Graphics products are being used on both Wallace’s No. 66 and Gaughan’s No. 62 during the 2010 season.

The winning designs and all the entries in the contest are available atwww.supercastmyride.com.

For more information on Avery Graphics products, order a sample roll of MPI 1005 Supercast film, pricing or roll sizes, printers can visit www.averygraphics.com to locate a distributor (on the Partner Page) or contact Avery Dennison at 800-282-8379 for additional product information.