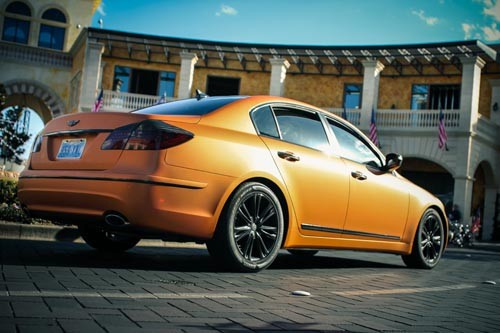 In Las Vegas, there are a lot of high rollers with a passion for exotic cars. Joe Alexander and Kevin Till, of Incognito Wraps, take these cars to the next level of customization with Avery Dennison Supreme Wrapping Films. With an increasing number of Conform Chrome and Supreme Wrapping Films and the conformability and slideability of Avery Dennison films, the sky is limit for the creative minds at Incognito.

“Our focus is to get ahead of a trend, before it becomes mainstream,” says Alexander. “Advertising wraps were exciting and cool a decade ago, now they’re a necessity for almost every business. They’re being churned out pretty quickly and the competition, especially in Vegas, has caused price wars among wrap shops resulting in slim margins.”

“At Incognito, we take cars, ranging from standard to exotic, from ordinary to extraordinary. Not just with the wrap, but with our attention to every detail,” adds Alexander. “We take enormous pride in the quality of our wraps and our customers recognize the care and attention to detail we put into every job.”

“The slideability of Avery Dennison films, even in the Vegas heat, is critical to our installations. It allows us to maneuver the film in ways we can’t with other films,” says Alexander.

Alexander believes Supreme Wrapping Film Blaze Orange Matte Metallic is a color that we’ll be seeing more of, especially on the West Coast. He wrapped a Hyundai Genesis in the color and took the wrap a step further, covering the door jams and wells with the film. “We like to call our work extreme wraps because we take the detail of the color change wrap to the next level,” adds Alexander.

"I’m from the UK and believe that paint wraps are the future,” says Till. “Custom paint wraps are finally gaining popularity here in the States. I’m bringing some of the European styling to the U.S. and our customers."