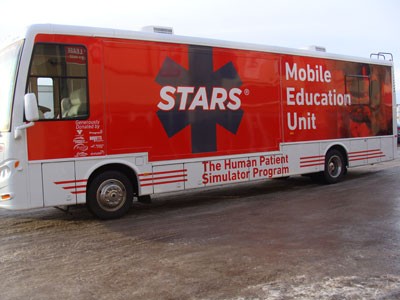 As many installers know, wrapping a vehicle in Avery Dennison vinyl films can make a small impact or a very large one. In the case of the STARS Mobile Education Unit project, Avery Dennison Supreme Wrapping Film made a big impact, not just visually but for the community too.

The MEU is a large motorhome that serves as a emergency simulator and traveling classroom for the community. Speedpro Signs, of Grande Prairie, Alberta, Canada, was commissioned to help transform the MEU’s exterior to reflect its mission in the community.

Before printing such a large graphic on Supreme Wrapping Film, Speedpro Signs performed an important step and printed several test runs to ensure success. The team  found a profile that worked and printed directly on the film. Avery Dennison 700 High Performance Calendered Film in Dark Gray and White were also used on the motorhome for the cut vinyl logos, text and sponsors.

The installation of the Avery Dennison films on the motorhome took 24 hours, with one to three installers working on the project at a time. The installation team used all the proper tools for the project, including cleaners, Knifeless Tape, and a clear silicone adhesive promoter.

The STARS Mobile Education Unit has been a big hit, since Speedpro Signs installed the new wrap. The MEU has been traveling all over Alberta and British Columbia updating the skills of rural medical professionals and teaching communities about emergency procedures. To learn more about the project, visit Speedpro Signs’ website or the STARS’ website.