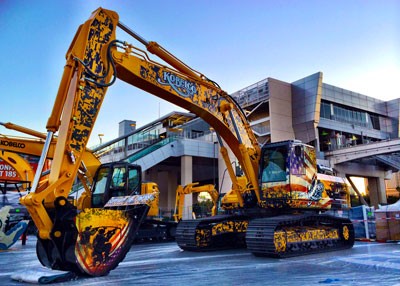 Kobelco has made a big splash at two CON EXPO trade shows with patriotic wraps digitally printed on Avery Dennison MPI 1005 Supercast film and installed on two excavators by Las Vegas-based GeckoWraps. The excavator wrapped and on display at this month’s show helped the company raise more than $100,000 for Wounded Warriors.

After creating a buzz for the new SK350 Mark 9 Excavator at the 2011 CON EXPO with an American flag themed wrap, Kobelco came back to GeckoWraps for a new design and wrap for this year’s trade show. CON EXPO, held every three years, showcases new products and technologies from every major construction industry including asphalt, aggregates, concrete, earthmoving, lifting, mining, utilities and more for over 100,000 attendees.

Because Kobelco’s excavators are so big, the company has a premier spot outside the Las Vegas Convention Center.  “The patriotic wraps definitely helped them gain attention,” said Shane Lloyd, founder and CEO of GeckoWraps. “This year, they sold 5 excavators with a wrap package and added a new twist, raising money for Wounded Warriors.”

The SK350 Mark 9 Excavator, wrapped in 2011 with Avery Dennison MPI 1005 Supercast and protected with DOL 1360 gloss overlaminate, made its way, after sale at CON EXPO, to the World Trade Center site last year. It was featured on the cover of the February 2014 issue of Sign & Digital Graphics.

“I’m a veteran and so are several people at Gecko. It meant so much to all of us that the Kobelco and our work made it to Ground Zero,” added Lloyd. “The wrap design for CON EXPO this year was a military tribute honoring all the branches of service and helped raise more than $100,000 for Wounded Warriors, which is so meaningful to us at GeckoWraps.”

“Kobelco has been very pleased with the wraps’ ability to capture attention and also generate sales,” said Lloyd. “For each unit sold with a wrap package, the company is donating thousands of dollars to Wounded Warriors.”

More than 1,000 feet of MPI 1005 Supercast was digitally printed and installed for each of the excavator wraps. This year, the SK350LC’s bucket was wrapped and topped with plexiglass to accept donations for Wounded Warriors.

“Avery Dennison has always provided us with great customer service,” shared Lloyd. “MPI 1005 Supercast prints well consistently and is easy and fast to install. It helped us install the wraps much quicker than we originally expected.”

For information on Avery Dennison products, designers and printers can visit graphics.averydennison.com or contact Avery Dennison at 800-282-8379. Join the Avery Dennison social conversation by visiting Avery Dennison Graphics Solutions’ Facebook page and following @ADGraphics_NA on Twitter and @AveryGraphics on Instagram.