Graphics at the Big Game 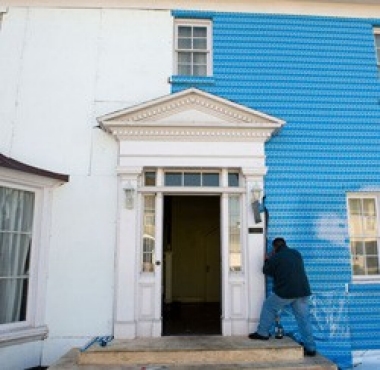 There is a seemingly endless stream of advertisements that surface before and during football's biggest game of the season. Busy consumers are inundated with images and messages, which is why brands try to ensure their advertising is especially unique and attention grabbing at this time.  Avery Dennison Graphics Solutions provides films and wraps that can be used in a bevy of ways to make sure projects stand out from the crowd.

Avery Dennison graphics films can also be used in television advertising. A commercial during the Big Game in 2010 featured a “Light House” that appeared to be made entirely of beer cans. This was made possible with Avery Dennison MPI 1005 Easy Apply RS™ with DOL 1360 Gloss, which was used to create the facade of the home. The graphics were printed by SkinWrapz. Peter Salaverry, the CEO of SkinWrapz, said, “We had to match the color and graphics of the beer cans exactly and were able to do it with the Avery Dennison vinyl.”

With Avery Dennison vinyl there are limitless opportunities to create signage and graphics at events. One such example is to use floor and window graphics to promote point-of-purchase or POP advertising campaigns. A quick and easy way to gain attention for a short POP campaign is to adhere floor graphics throughout grocery stores. Window graphics could also be used for the store’s exterior and freezer doors.

There are many opportunities to advertise in new and fun ways by using Avery Dennison wrap films.