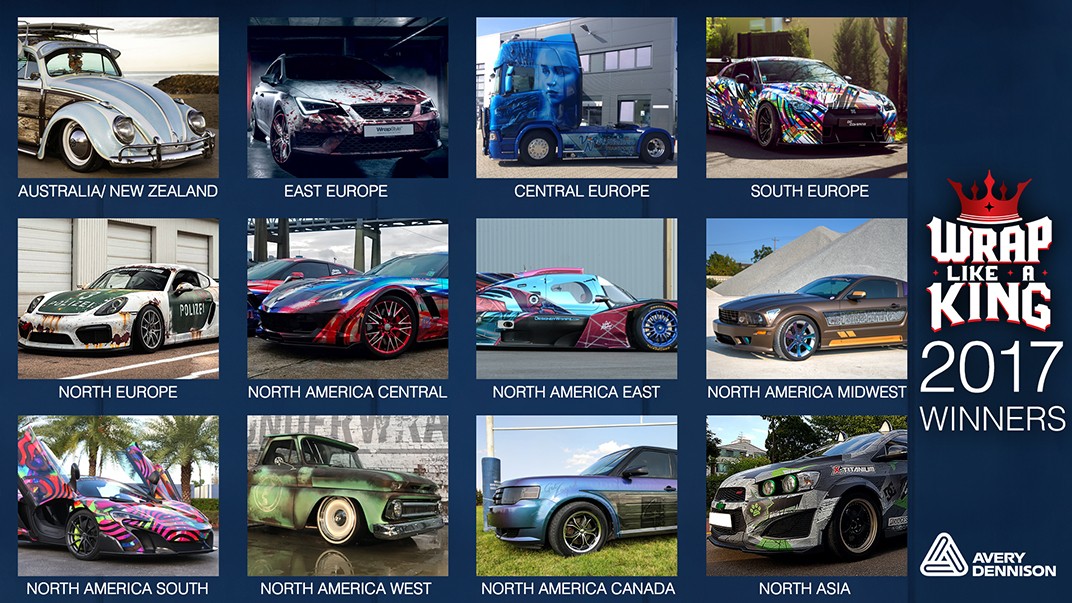 “I’m really proud to take home a regional crown for the third year in a row, especially with the way installers have raised the bar every single year,” said Kevin Kempf, owner of PG NOLA. “If I’m able to bring the title of Continent Winner and King of the Wrap World back to my shop against this incredible field, it will be a truly special achievement.”

“I’ve been honored to be one of the judges for the Wrap Like a King Contest since it began and, without a question, this year was the hardest to choose a regional winner. There are so many unique and out of the box wraps that push car wraps to new levels,” said Justin Pate, world-renowned vehicle wrap installer. “I can’t imagine how hard it will be to cast my vote for the winner. It’s super exciting to be part of this.”

“For our fifth year of the Challenge, we were blown away by the planning and technique that went into creating each of the region-winning vehicle wraps,” says Jeff Losch, North America marketing director at Avery Dennison Graphics Solutions. “All of the entries are a great reminder of the dedication and creativity of wrap installers around the globe. The judges will have a difficult decision picking the overall king.”

Each Regional Wrap King won an initial prize package valued at close to $2,000. The prize pack includes passes to the SEMA show, a Regional Wrap King trophy and, a large banner stand display, two free rolls of Supreme Wrapping Film and social media exposure. The $3,200 prize pack for continent winners includes personalized Wrap Like a King swag, $500 in gift vouchers, a 67” Race Ramp and a variety of promotional and marketing tools for the winner’s wrap shop.

The eight professional judges evaluated the 159 total submissions based on the following criteria: visual transformation (difference between the before and after pictures submitted), quality and skill level of installation, overall public look and appeal and uniqueness of the design.

Avery Dennison (NYSE: AVY) is a global leader in pressure-sensitive and functional materials and labeling solutions for the retail apparel market. The company’s applications and technologies are an integral part of products used in every major industry. With operations in more than 50 countries and more than 25,000 employees worldwide, Avery Dennison serves customers in the consumer packaging, graphical display, logistics, apparel, industrial and healthcare industries. Headquartered in Glendale, California, the company reported sales of $6.1 billion in 2016. Learn more at  www.averydennison.com.

A segment of the Avery Dennison Label and Graphic Materials Group, Avery Dennison Graphics Solutions provides imaging materials and service solutions for fleet, architecture and transportation markets. For more information, visit graphics.averydennison.com. Join the Avery Dennison conversation at www.facebook.com/AveryDennisonGraphics, follow us at @ADGraphics_NA on Twitter and stay up to date by subscribing to Avery Dennison Works, a monthly e-newsletter.